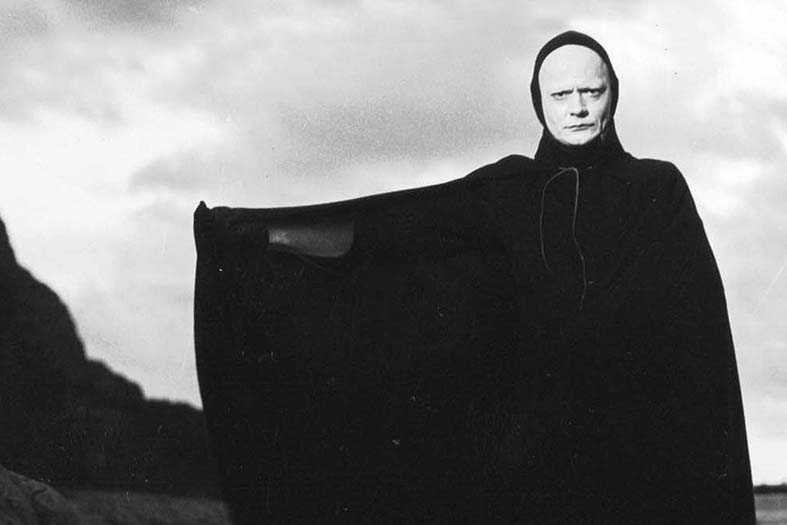 Posted at 16:06h in News, News ed Eventi by supercortile

Films, writes Fernand Braudel, are agents of history. One in particular coincides with the essence of the Courtyard of the Gentiles. I am referring to the Seventh Seal (Det Sjunde inseglet) of Ingmar Bergman, produced a good sixty years ago. The story takes place in the XIV century. Europe is distraught by the plague and fanaticism has prevailed over religion. The knight Antonius Block, magnificently played by Max Von Sidow, returning home from the crusades meets Death itself.

When it comes forward to wrap him in its black robe, Block manages to convince it to wait, challenging it to game of chess.

So this initiates a game wanted by the knight to find out if, by beating death at the game, his life would be saved.

A detail of no small matter: Von Sidow appears in the film with his face shaped by the shadows, reminiscent of those ancient Nordic figures carved in wood, to evoke a substance or the abstraction of a concept.

The Seventh Seal, in the Apocolypse of Saint John is broken by the lamb of God, making it possible to read the book of life. The knight wants to discover this: the meaning of his existence and, for this, asks to postpone death by challenging it to the game. The time that Block gains will be used to carry out a useful action, after a lifetime (“a void without reason”) that he sees wasted in smallness, like – he says – that of everybody.

But why is this film one in body with the Courtyard of the Gentiles? Why does the Seventh Seal portray the ground of believing and thinking, between nothingness, hope and its negation. In short, it portrays the tortuous but necessary way of free research for beyond every historic barrier (political?) between belief and non belief.

The knight, before dying, wants the physical surety of the existence of God, thus breaking the silence: “Faith – he says – is such a painful punishment.  It is like loving someone who is out there in the dark and doesn’t show himself/herself despite being called. […] God, you exist somewhere, you certainly must exist!” And, again, facing a young woman condemned to the stake: “I want to meet the devil, I want to talk to him about God. He definitely knows more than anyone else.” And while she burns, the squire of the knight (capital figure, as Block) looking at her says: “Nothingness engulfs her and watches over her […]. Our terror is equal to hers. No one [no god] watches over her… she is enveloped by the darkness of night… the darkness and emptiness of nothingness. “

In aphorism 125 of the Gaia Science, Friedrich Nietzsche tells of a mad man that, lighting a lantern in the light of the morning, runs to the market shouting loudly: “I’m looking for God! I’m looking for God!” Other men who do not believe in God listen to him amusedly. Among them, one asks the mad man if God is lost or if, out of fear, is hiding. The mad man replies solemnly affirming that God is dead, assassinated by the hand of man:

God is dead! God is dead and we have killed him! How can we console ourselves, we the murderers of all murderers? What the world had that was the holiest and the greatest has bled to death under our knives .. who will take away this blood? With what water can we wash ourselves? What expiation ceremonies, what holy scenes should we invent? Isn’t the immensity of this deed too great for us? Do we have to make ourselves gods, if only to appear worthy?

Utterring these terrible words, the mad man, seeing the astonished looks of those present, takes his lantern and throws it to the ground, smashing it. It is then that he realizes that his proclamation has reached man too soon (“the time has not yet come”, the “immense event is still on the way and is going astray”). Men have killed God, but are not aware of it. The passage reveals the profound suffering of Nietzsche himself who, led by cognitive research, comes to the realization of the lack of meaning: the death of God, of which he himself is the murderer. It is the tragedy of the folly of nihilism, by which you may think that everything that is turns into nothing – therefore, becomes nothing and thus it is and it is not. The passage ends with the Requiem aeternam Deo intoned by the mad man in the churches, which he sees as funeral monuments, tombs of God.

Dostoevsky, in the Adolescent, writes that life without God is only a suffering, so those who do not believe would be idolaters, not the godless.

Regarding this paradoxical and provocative statement, let us ask ourselves: will it be like this? Or will the opposite be true? Knight Block and his squire are there to accompany these questions. It is questions like these that allow us to build a real new secularism, a true freedom of thought that is not biased in accepting, that is, taking seriously, both the arguments of negating as well as accepting the existence of God. Without prejudices. Without fear of appearing gullible or, conversely, “heretical” (among a thousand quotes because heresy is false logic).

In this field, the only freedom is the winding road traveled by the Knight Block: asking himself about God, between faith and its negation, he builds the great free research to the best of his possibility. True research needs to follow this difficult path, but we will never take even one step forward if we do not shake off the weight of oppositional preconceptions.

I reworked this chapter of my book “New Humanism, New Secularism”, of a few years ago. I will continue on this very difficult, vast and even risky theme. I anticipate four themes (more than anything, battlefields): the Grand Inquisitor of Dostoyevsky, the Lamentation of Jeremiah, the Antigone of Sophocles and something that here in some way we have evoked by speaking about a knight and madness: Don Quixote, an immortal masterpiece.